The Inkeeper formerly known as Viara.

Hardworking barkeeper. Listens to the problems of the kingdom's residents. Edit

Wiala is the woman who greets all travellers into town, she teaches you about various things, areas, and actions; she also gives you the majority of Tutorial Quests and assigns daily quests, even giving a few other types of quests.

Unlike most people in the kingdom, she can't die and doesn't age, nor' does she have a known age. She also cannot be married and never leaves the Tavern, meaning she can always be found wandering the lower floors of the Tavern. 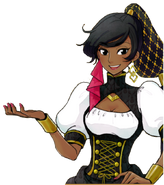